This year’s Brooks Snowdonia Marathon Eryri on 24th October will definitely have an upbeat feel as Welsh rocker Mike Peters will be there to officially start the race.

A tireless fundraiser and inspirational speaker, Mike will be singing ‘By Your Side’ to runners at the start. The song provides a soundtrack for his By Your Side campaign which raises funds for cancer care in North Wales.

“Mike’s been receiving treatment with us for many years and has supported our local cancer services through Snowdon Rocks and other local events which he’s organised for a long time. He launched the three year ‘By Your Side’ cancer care campaign with our charity, Awyr Las, last year and has already raised an incredible £175,000 for new equipment and facilities.

“We’re all very grateful for the time, effort and passion he and his wife Jules puts in to supporting patients and their families across North Wales.”

Mike added this: ‘’I launched the By Your Side cancer care campaign last year with the North Wales NHS Charity, Awyr Las, because I wanted to show thanks to the fantastic health care staff who have helped me over the years since I was first diagnosed with cancer, and I wanted to make sure that local people get the excellent care and treatment they deserve locally.

“Through the tremendous support of local people, groups and schools, we’ve already raised £175,000 towards our £351,120 target.

“I’m very grateful to the organisers of the Snowdonia Marathon for letting us have a Love Hope Strength ‘Get on the List’ stand at this year’s event. I co-founded the Love Hope Strength Foundation in 2007. Since then, through the charity’s ‘Get on the List’ programme we have added over 100,000 people on the international bone marrow donor registry and found over 1,200 matched donors.

“I really hope that you will take the time to go to the Love Hope Strength stand to find out more about how you can get on the list. It only takes 2 minutes, but you can save someone’s life by doing it.”

Brooks Snowdonia Marathon Eryri has worked closely with Welsh cancer charity Tenovus for a number of years now and sees these new links as a great way to expand their support of some of the amazing work being carried out in North Wales.

Race coordinator Jayne Lloyd is very excited about having Mike along to start the race:

“Mike is a truly inspirational person whose campaigns we are proud to support. He’s very popular in Llanberis so there should be an extra buzz in the village on the 24th!’’

Reckoned by many to the toughest in the UK, considered by many to be the most beautiful, the 2015 Brooks Snowdonia Marathon Eryri is ready welcome 2500 runners this week, as they take on the might of this jewel in the crown of Welsh marathon running.

As final preparations are being put in place for the 33rd edition of the event, the race will once again showcase all that the Snowdonia National Park has to offer in terms of splendour for the thousands of visitors that are expected across the race weekend. 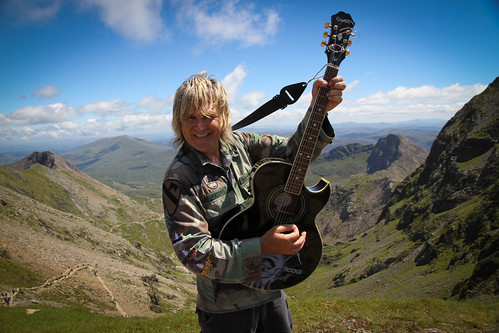