“Knowing that each one of our gigs has the potential to save lives is very humbling,” Plant says of Peters’ bone marrow registration booths at concerts

Mike Peters, the frontman for U.K. bands the Alarm and Big Country, has been fighting cancer for 18 years. In the mid-’90s he went into spontaneous remission after being diagnosed with lymphoma. Ten years later he was diagnosed with leukemia.

“My ambition is to stay alive as long as I possibly can with the drugs I’ve got until the drugs that have the cure come along,” says Peters, who undergoes chemotherapy every two months while on tour with Big Country.

In the meantime, Peters is working to help save the lives of other cancer patients through the Love Hope Strength foundation, an organization he co-founded in 2006 with fellow cancer survivor James Chippendale, executive VP of entertainment insurance company Doodson. LHS has partnered with numerous tours and music festivals to set up on-site bone marrow registration drives where volunteers collect cheek-swab samples from concertgoers in an effort to find potential donors.

“More and more people are rallying around what we do and understanding the simplicity: People can come to a rock ‘n’ roll concert and actually be a lifesaver,” Peters says, noting that 600 matches have been found to date.

This summer, LHS’ “Get on the List” campaign can be found at U.S. tour dates for Robert Plant, Kenny Chesney, O.A.R. and the Under the Sun tour, as well as the Lollapalooza, Bumbershoot and Austin City Limits festivals. Volunteers are also on hand collecting samples during every concert at Red Rocks Amphitheatre in Morrison, Colo.

“Knowing that each one of our gigs has the potential to save lives is very humbling,” Plant says. “LHS is doing a great job out there in educating and raising awareness for this type of cancer. More people need to realize how simple and painless it is to get on the register and help save a life.” 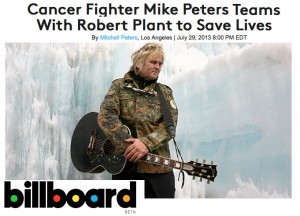