This December 5th 2017, Love Hope Strength Foundation (in partnership with DKMS UK), will be hosting a third blood stem cell donor recruitment drive in the Houses of Parliament aimed at getting as many new British MP’s and government staff as possible, to sign up as potential stem cell donors.

The donor drive has once again been organised by LHS co-founders Mike and Jules Peters with the support of North Wales MP’s Chris Ruane (Vale of Clwyd), and Mark Tami (Alyn & Deeside).

It provides a third major opportunity to send a positive message to the entire nation especially as it is 5 years since our first Parliamentary drive that resulted in Mr. John Glen MP (Salisbury and South Wiltshire), becoming a matched donor for someone in need of a transplant and a second chance at life. John Glen’s remarkable story (pictured), is captured in the award winning film – Man In The Camo Jacket which is set for limited edition DVD release in the UK also on December 5th.

Mike Peters, Jules Peters and Love Hope Strength are therefore calling on all supporters, to write to their local MP and ask him or her to attend the event at the Jubillee Room, Westminster on December 5th between 12 noon and 3pm.

It’s really simple to do and is as easy as visiting www.writetothem.com and typing in your postcode. The name of your local representative will come up and there will be a simple box to post your letter in (see letter below), fill out the address form – press send and that’s it! Easy!

LHS has continually campaigned in Parliament and throughout the UK to raise awareness of the increased opportunity for UK donors between the ages of 17 and 55 to get on the international donor list via it’s partnership with DKMS UK.

Photos and slideshow from our 2015 event here: 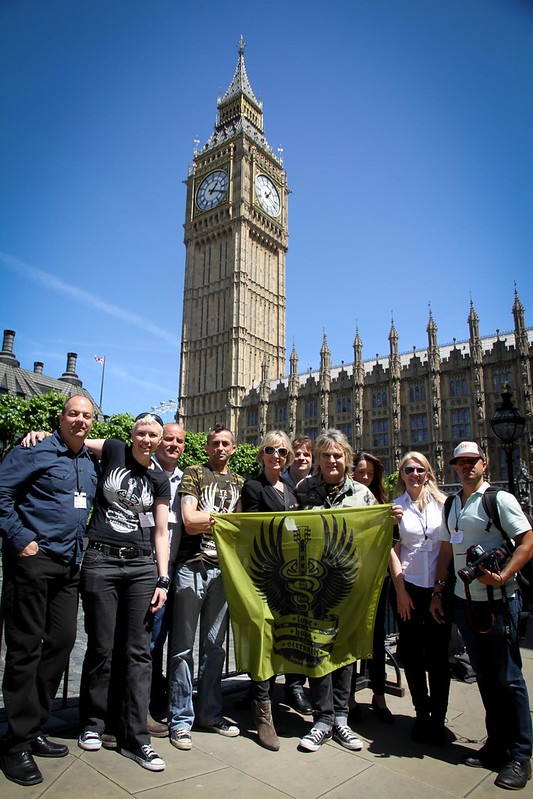 To date over 16,400 people have stepped forward (via LHSF UK Donor Drives), and some 150,000+ (via LHS USA), to potentially offer their lifeblood to save others in need of a second chance at life.

Thank you so much for your support.

The Letter for you to send via www.writetothem.com is here:

Dear (Please fill in the name of your local Member of Parliament),

As a member of your constituency, I am writing to inform you that British charity ‘Love Hope Strength Foundation’ (LHSF) and ‘DKMS UK’ are hosting a Blood Cancer Donor Recruitment Drive event in the Jubilee Room on Tuesday 5th December 2017, and are hoping to get as many MP’s and Parliamentary staff as possible to sign up to the international donor registry.

I am writing to ask if you will consider becoming a potential blood stem cell donor because as you may be aware, half the people in Britain who need a lifesaving stem cell donor do not find a match.

A few seconds of your life could help to give someone else the rest of theirs, so I’m hoping you will attend and promote the fact that increasing the number of UK donors will significantly improve the chances of those patients needing stem cell transplants throughout Britain and the rest of the world.

DKMS UK’s age bracket for potential donors is 17- 55 which also means that most people in Britain are now eligible to become a donor. It’s a quick and simple process for those in this age bracket and in good general health and only takes few minutes – potential donors can fill in a simple consent form and swab their cheeks with a cotton swab to determine their tissue type. Their details are then stored anonymously on a national register.

It is my hope that you will represent our community, register and further inspire other MP’s, individuals and families alike to become potential life savers (and to further raise awareness that being a stem cell donor in this day and age can be as simple as giving blood and in most cases virtually painless). It’s also a unique opportunity to tell the UK that with the wider and more inclusive age range of 17-55 there is a greater chance for those families searching for a donor for their loves one.

I hope that on December 5th at the Parliamentary donor drive, aimed at UK Members of Parliament in the Jubilee Room between 12 noon and 3pm, you will find the time to join some prominent British musicians, cancer patients, survivors and celebrities in sending a unified message to the whole country and become a potential stem cell donor that day, thus providing a role model for the rest of the house, and for the country and our community.

Love Hope Strength and DKMS UK are hoping to encourage and support thousands of people in the UK to become potential stem cell donors and to give blood cancer patients in need of a donation a second chance at life.

Love Hope Strength Foundation was founded by Mike Peters who is the lead singer of British rock band The Alarm. Mike is also a Leukaemia survivor who may one day need a transplant and after his diagnosis in 2005, set up LHSF to help to support those British nurses and doctors who saved his life.

The first LHSF event began with Snowdon Rocks in Wales in 2007 to support the North Wales Cancer Centre where Mike Peters was and still is being treated. That same year the the charity was registered in the USA and began rolling out the Love Hope Strength message via musical expeditions to Mt. Everest, Kilimanjaro and Mt. Fuji, building cancer centres in Tanzania and Nepal for those less fortunate than ourselves in Britain, along the way. In 2010, LHSF partnered with Delete Blood Cancer in the USA and began hosting successful donor drives across America.

Since then, this unique partnership in the UK alone, has inspired 14,600 new donors to join the registry (via LHSF events), and discovered over 200 potentially lifesaving matches of which 17 have transpired to give an actual patient a second chance at life.

DKMS UK, is part of the DKMS Germany family of organisations worldwide which was founded more than 25 years ago. Today, DKMS works internationally and has recruited more than 7.73 million registered donors so far and given 66,000 patients a second chance of life. They won’t stop their work until they have found a match for every patient who needs an unrelated transplant.

I sincerely hope that you will consider becoming a potential stem cell donor and support us in inspiring the nation to ‘Get On The List’.